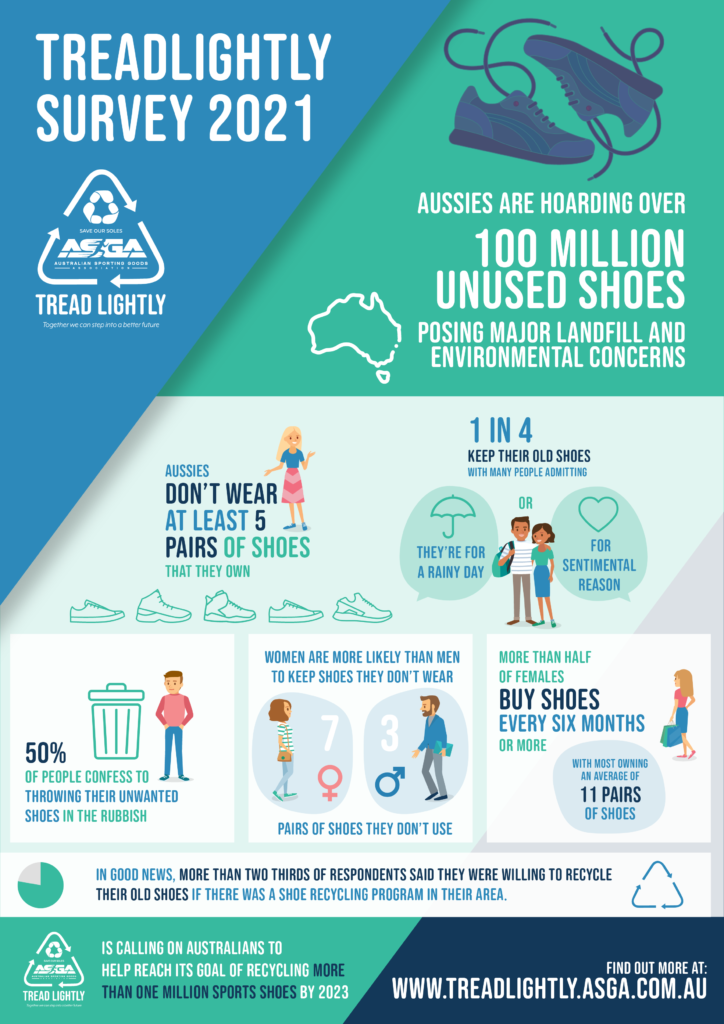 New research by TreadLightly reveals the average Australian admits to owning about five pairs of shoes they don’t wear – the shocking equivalent of 100 million unused shoes that could end up as landfill. Nearly a quarter of respondents (24 per cent) keep onto their old shoes, with many people admitting it’s for a rainy day or for sentimental reasons – while half of respondents (51 per cent) confess to simply throwing their unwanted shoes in the rubbish.

TreadLightly – a new industry-led national recycling initiative powered by the Australian Sporting Goods Association (ASGA) and recycler Save Our Soles (SOS) – is addressing the problem by taking unwanted sports and active lifestyle shoes and responsibly recycling them into mats and flooring for retail stores, gyms and playgrounds.

“This research commissioned by TreadLightly and conducted by 10 THOUSAND FEET highlights just how many shoes are collecting dust at home, and how many shoes end up in the rubbish because we don’t know what else to do with them,” said Shaun Bajada, Executive Director, Australian Sporting Goods Association.

Bajada says this is a national problem and a significant environmental concern with shoe components taking over 1000 years to breakdown. “TreadLightly exists to solve a very real industry issue. We’re committed to working closely with retailers, manufacturers and consumers to reduce the industry’s environmental footprint and to stop millions of shoes ending up as landfill every year.”

“Over 110 million shoes make their way to Australian shores each year of which 25 million are sporting and athletic lifestyle footwear. The wider industry, as well as consumers, want to do more to reduce their environmental impact and TreadLightly makes it easy for everyone to do their bit for the planet,” said Bajada. TreadLightly is calling on Australians to help reach its goal of recycling more than one million pairs of shoes by 2023.

“All you need to do is look around your home for any unwanted sports or active lifestyle shoes – from sneakers and trainers to golf shoes – and take them into one of our 400+ participating retailers to be recycled when your state opens up.”

The TreadLightly survey also shows that:

TreadLightly is supported by the Federal Government to recycle more than one million pairs of sporting and athletic lifestyle shoes by June 2023 to save 400+ tonnes of footwear going to landfill.

About Tread Lightly
TreadLightly is a national recycling initiative that provides the inspiration and the means to address the sporting and active lifestyle industry’s environmental footprint by uniting and empowering brands, retailers and consumers to give preloved footwear a new life.

Powered by leading industry body the Australian Sporting Goods Association (ASGA) and Australia’s premier footwear recycler Save Our Soles (SOS), TreadLightly is supported by the Federal Government to recycle more than one million pairs of shoes by June 2023, saving hundreds of tonnes from local landfill. Australians can recycle their preloved footwear at participating retailers for them to be recycled responsibly and given new, meaningful life as retail and gym flooring and playgrounds around Australia.

About the research:
The data for the research study was obtained via an online survey of the Australian general public, aged 18+, conducted in September 2021. Sampling was nationally representative on age, gender and location and sourced through an online panel of Australian consumers.

For any images, further information or to set up interviews with a brand representative, please contact Tara Ballard (contact details: 0436 330 267 tara@asga.com.au)

The Australian Sporting Goods Association was formed in 1981 to act as the “peak body” representing a broad spectrum of sporting and active lifestyle goods industry participants, including brands, manufacturers, distributors, and retailers.

ASGA is a leading industry voice on issues impacting the health, trade, taxation, regulation, market research, environmental and sustainability areas of the sporting and active lifestyle industries. It aims to foster the market growth, provide services, and advocate for increased participation in sport and physical activity. ASGA is a leading advocate in the industry and is at the forefront of debate and leads industry opinion.

About Save Our Soles

As Recycling Process Lead, Save Our Soles (SOS) manage all resource reclamation activities, from extraction to end product development. Save Our Soles is committed to ensuring that all Shoes that are imported into Australia and New Zealand are recycled and used in this market. Australia imports approximately 100 million pairs into Australia and New Zealand every year and we have to start reusing this valuable product rather than throwing them into landfill.

TreadLightly urges schools to step up for the planet

WE WANT TO HEAR FROM YOU.​

We use cookies on our website to give you the most relevant experience by remembering your preferences and repeat visits. By clicking “Accept All”, you consent to the use of ALL the cookies. However, you may visit "Cookie Settings" to provide a controlled consent.
Cookie SettingsAccept All
Manage consent

This website uses cookies to improve your experience while you navigate through the website. Out of these, the cookies that are categorized as necessary are stored on your browser as they are essential for the working of basic functionalities of the website. We also use third-party cookies that help us analyze and understand how you use this website. These cookies will be stored in your browser only with your consent. You also have the option to opt-out of these cookies. But opting out of some of these cookies may affect your browsing experience.
Necessary Always Enabled
Necessary cookies are absolutely essential for the website to function properly. These cookies ensure basic functionalities and security features of the website, anonymously.
Functional
Functional cookies help to perform certain functionalities like sharing the content of the website on social media platforms, collect feedbacks, and other third-party features.
Performance
Performance cookies are used to understand and analyze the key performance indexes of the website which helps in delivering a better user experience for the visitors.
Analytics
Analytical cookies are used to understand how visitors interact with the website. These cookies help provide information on metrics the number of visitors, bounce rate, traffic source, etc.
Advertisement
Advertisement cookies are used to provide visitors with relevant ads and marketing campaigns. These cookies track visitors across websites and collect information to provide customized ads.
Others
Other uncategorized cookies are those that are being analyzed and have not been classified into a category as yet.
SAVE & ACCEPT